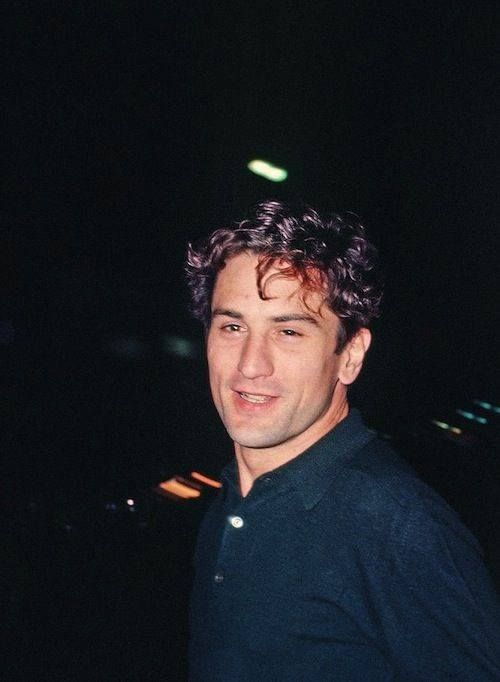 Growing up in NY to a gay father with feelings of insecurities and loneliness, De Niro’s acting may have been a form of self therapy as well as an attempt to come to terms with his ambivalent feelings towards his father.

De Niro from a young age has dedicated the craft of acting to the style of the method by which he immersed himself wholeheartedly into the character he was going to play by taking on their personas for real.

Marcello Mastroianni dismissed De Niro’s performances as the opposite of true acting stating that by nature, the actor is a kind of wonder who can allow themselves to change personalities. If you don’t know how to do this, it’s better to change professions.

After world war two acting took on a different appearance. Performances, in particular became a magnet to the maladjusted. The actor no longer a hero of Victorian melodrama became more human, weak and fallible.

As opposed to Lee Strasberg Actors Studio which taught method acting, Stellar Adler decided against that type of approach and instead taught a different method based on Stanislavsky’s ‘Building a character’.

De Niro found his way into her classes and always gave her credit for having a big effect on his acting career. For Stella acting wasn’t about neurosis or playing on your neuroses, it was much about the character, being faithful to the text and the script. The given circumstances of a play, its plot and character, were the actor’s fundamental concerns. Real acting, Stella stressed, lay in making choices – not in imposing your psychology on the character but finding the character and choosing the way you explored and illuminated that character. ‘The talent is in the choices’ became her catchphrase. And De Niro took that on board.

De Niro was a shy young actor who felt uncomfortable around his fellow students. Yet all his energy was directed towards performance. He was hell-bent on being a success but not just a movie star. He didn’t want to be a star. He wanted to be an actor.

De Niro’s theory was that one had to ‘earn the right’ to play a role, either by detailed research or by transforming one’s appearance. When a scene demanded a costume, he had plenty to choose from. His closet was filled with diverse range of costumes which included hats, derbies, caps, and more. He would regularly browse the flea markets and thrift shops of the Lower East Side collecting all sorts of clothing – because ‘costumes can look too created’.

There was also an interest in photography which made De Niro take a professional interest in his own portraits. He would carry around with him photographs to auditions in various disguises to prove to casting directors he wasn’t an exotic. And he’d also have a stack of paperback novels with him as ideas for characters he might play or turn into screenplays for himself. He was totally focused on his work.

One casting director remembers De Niro’s portfolio of pictures in which in one of them he was made up as an eighty year old man. In other shots he was wearing costumes of all kinds. She had never seen anything like that in any of the portfolios of young actors which for the most part looked glamorous.

His degree of preparation went well beyond simply putting on costume and make up to have his portrait taken. For one of his earlier films in which De Niro had a small part he turned up for his first interview with a thick ‘character’ book, an album of pictures showing him in various make ups and outfits.

It was common practice for actors in those days – as is done even today – to work up a series of character photos. But De Niro had done more than that: he had actually worked on the charactersPaul Schrader the scrip. It all stemmed from Stella Adler’s teachings, working up fully-drawn characters, not just in photos.

Later on in life De Niro revealed that he hoarded every major item of wardrobe from all his films, a collection that comprised more than 2600 costumes and five hundred items of make up and props. To find inspiration in a costume isn’t in itself odd, but to hoard them distinguishes De Niro from the majority of movie actors, who attempt to remove barriers between themselves and the audience rather than erecting them.

Stella’s teachings prepared him well for visualising the character completely, understanding the motivations and making informed choices about the tone of voice and the way the character was to dress and move. It was a technique which he incorporated into every role of his and like the great impersonating actors of the 20’s and 30’s who he increasingly resembled, De Niro came to believe that creating a convincing character demanded detailed research and physical effort, even suffering. One had to ‘earn the right’ to play that person. The theory would cause him considerable discomfort, but would produce his best work.

In his younger days De Niro would struggle just like any actor did in New York. He became accustomed to outsiders getting all the major acting roles yet he was taking anything that came along even if there wasn’t that much. But he remained optimistic. He never became disillusioned. He knew that if he kept at it he would at least make a decent living. And if you are halfway decent at what you do, by the law of averages in five or ten years you would make enough money to do what you wanted to.

De Niro was the type of actor that on the surface, when you looked at him in real life, didn’t inspire much notice or attention due to his reserved and shy nature but once the director shouted action the transformation would occur. One of his stand ins gave an example of seeing De Niro perform at first off camera which seemed very unimpressive at the time. But later on when he sat closer to the camera and got to look through the lens he realised he was watching a genius. He seemed to enchant the camera when seen through the lens which goes to show that Bob is a guy that the camera loves.

‘When he’s not on screen’ Scorsese said, ‘Bob is so reserved that you just wouldn’t know him. In a social situation, he’s a completely different person, and that’s one of his most endearing qualities’. In Scorsese parlance that meant that De Niro was happy to talk about movies and movie techniques, since this was what De Niro enjoyed doing above all else.

Yet, for those who weren’t interested in chatting about film, his introspection held less charm. He seemed to be less articulate than many and less able to express his thoughts – and often having no thoughts to express aside from those about the work in hand – which meant he took refuge in anonymity.
Paul Schrader the scriptwriter for Taxi Driver said Bobby only exists when he is in someone else’s skin. 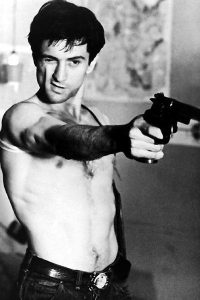 For the majority of his earliest roles De Niro was never a movie star – but a movie actor which was a crucial distinction when it came to bankability. He was a number of things all at once. There were lots of different people in him. He always found release and fulfilment in becoming other people. Picture after picture, he got deep into the thing. He’d find his solution for living at a time like this: in work. When working with Elia Kazan on a film they’d work together over the wekend going through the shooting script for the week ahead. Kazan said of De Niro that he was the hardest working actor he’s ever met and one of the best guys he’s ever met in the business. When De Niro played opposite Christopher Walken in The Deer Hunter he suggested Walken to tone down his performance and to do everything he was doing while playing the whole scene in his head. In other words not to talk. Walken understood what De Niro meant. Thinking his dialogue rather than saying it made his character seem vaguely distracted, his mind elsewhere. ‘That was great direction’ Walken recalled. Which of course, ended up winning him the Oscar for best supporting role. g for autographs. Those were the odd ones and their style of clothing and costumes were what convinced De Niro to dress in a polkadot jacket, blue shirt, red tie, blue trousers with white belt and

When Meryl Streep acted opposite De Niro in the same film she said ‘When you look into his eyes, it’s like looking into the fathomless deep. In my scenes with him, I felt the unreality of the set and the cameras and all those things that want to interfere. Bobby’s eyes were like – oh! I just felt enveloped in their gaze. Huge emotions right under the surface.’ 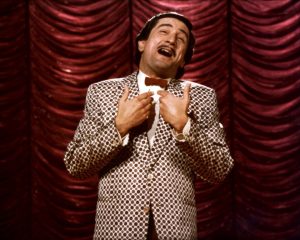 Comedy represented a pitfall for De Niro that even a well known director known as a true king of comedy regarded De Niro as simply not funnwhite shoes. To emphasise the theatrical effect, he lengthened his hair which was cut in a style calculated to look like a wig and grew a moustache. One of the Guardian’s critics commented that it was the moustache that told you everythiny. But De Niro was not one to lie down and take it. In his portrayal of the character Rupert Pupkin’s in Scorsese’s King of Comedy he spend time around stand up clubs and incorporated elements of Robin Williams and John Belushi in the character’s role. But he was more attracted to the people who were the wannabes who hovered at the stage doors or outside TV stations waiting you needed to know. The moment you saw the thing on his upper lip, you knew he was a man who thought he was funny but wasn’t. More than that, he was convinced of what a tragedy it would be if the world was robbed of his comic gifts.

Eventually De Niro realised that comedy may not be his forte and later in his career, following the release of Midnight Run, he would content himself with playing straight man – not funny himself, but able to provide a foil for someone who was. It was a function he’d fulfil opposite Billy Crystal in AnalyzeThis, Dustin Hoffman in Wag the Dog and Ben Stiller in Meet the Parents – Laurel to their Hardy, Abbott to their Costello.

In most of his earlier film De Niro always chose to make films which balanced a strike between self interest and responsibility for others. James Woods, the actor who played opposite him in Once Upon a Time in America said that De Niro is one of those people who has a barometer for the truth of a scene. He just can’t act if the scene isn’t right. He isn’t able to. He would say ‘Oh, this feels false.’ He just didn’t know how to do it. And if the scene was right in the way it was set up and conceived and written and the acting was going pretty well in rehearsals, he just flourished. He’s a natural and it’s not like he puts his foot down or something, he’s just not very good at doing – he just isn’t capable of doing bad acting. And he’s just a natural when everything’s right.